MISSOULA – Montana’s tribal nations now have a dedicated institute for all things policy, governance, and research when it comes to the overall health of Indian country.

The Montana Board of Regents recently approved the creation of the American Indian Governance and Policy Institute (AIGPI) at the University of Montana. The institute was created and is currently directed by Heather Cahoon, assistant professor in UM’s Department of Native American Studies.

AIGPI received a $26,500 planning grant from the Headwaters Foundation and Clearwater Credit Union has given the first $5,000 toward establishing a student scholarship fund for the institute.

The independent, nonpartisan research center will pull from expertise across the Montana University System, including expert scholars, researchers and students, to produce evidence-based information so that tribes can make informed decisions for a variety of governing decisions. The ultimate goal of the new institute, Cahoon said, is to address the core causes of poor socioeconomic health on Montana’s Indian reservations.

“Most government policymakers on the federal and state levels have readily available research and data provided from research service divisions,” Cahoon said. “That same, necessary service currently is not provided to tribes, and this new center will be instrumental in providing Montana tribal governments expert in-depth research and policy support.”

Cahoon said the AIGPI will complement and support the work already being done in tribal communities to address cornerstones of health, which include education, the criminal justice system, access to healthcare and economic development. Ideally, Cahoon said the AIGPI will match university system expertise with the ongoing efforts of tribal leaders to address the social determinants driving poor health outcomes in their communities with “tribes driving the research agenda.”

“Up until this point, no one has been able to crack the code of eradicating health disparities on reservations,” Cahoon said. “But if we can provide research at the tribal government level and support the work they’re already doing, I believe we can find the answers that are already in these communities.”

Housed within UM’s Department of Native American Studies, the AIGPI also is affiliated with the Margery Hunter Brown Indian Law Clinic within UM’s Alexander Blewett School of Law III and the Department of Public Administration and Policy ꟷ that will provide support to inform the development of legal documents such as tribal codes, ordinances and intergovernmental agreements, among other items. Additionally, any material or research produced from AIGPI will be free and publicly available on a database.

Cahoon said the joint nature of AIGPI will allow the institute to take “a deep dive into a social or economic issues particular to one tribe.”

Cahoon, who is Upper Kalispel, grew up in St. Ignatius on the Flathead Indian Reservation and is a member of the Confederated Salish and Kootenai Tribes. Spending three years developing close relationships with Montana tribal councils as the former state tribal policy analyst with the Montana Budget and Policy Center, Cahoon worked with tribal governments across the state. She said most Montana tribes are concerned about growing their economy and the physical and mental health of their communities.

Gerald Gray, chairman of the Little Shell Tribe of Chippewa Cree Indians and chairman of the Rocky Mountain Tribal Leaders Council, said AIGPI is long overdue for the 12 tribes in Montana.

“Tribal governments are pulled in so many directions that they often don’t have the time or expertise to collect background data and research for a particular decision,” Gray said. “This data from the center will be able to provide tribes an incredibly important resource for decision making and policy creation for all tribes – each with individual challenges and needs.”

Gray added that tribal overall health across the state varies and is largely dependent on location, resources and amenities.

“No tribe is the same, but in many ways all Indians under the reservation system have not been set up to succeed, and many are not thriving,” he said. “A center like this at UM allows tribes to work with evidence and data to address the answers and opportunities that are critical for the future.”

Currently, Cahoon is working to develop a comprehensive public policy needs assessment to identify the existing tribal policy voids and needs of each of Montana’s eight tribal governments. This effort was made possible by a $99,956 grant from the Montana Health Care Foundation.

Click here to read the full press release from the University of Montana. 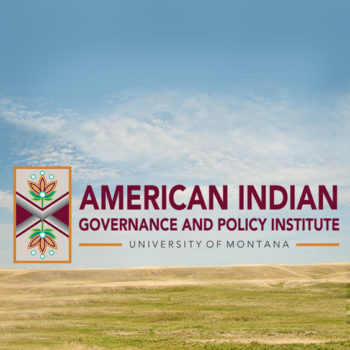