Each member of the Clearwater Credit Union (MFCU) Board of Directors serves a 3-year term. Each year the Nominating Committee nominates candidates to fill expiring terms or vacant positions.

Board of Directors incumbent Martha Newell, along with new nominee, Geoff Gilbert, have been nominated for the two three-year posts open for election this year. Following the MFCU bylaws, since there were no additional nominees by petition and the number of nominees equals the number of positions to be filled, the election will not be conducted by vote, but will be declared by acclamation at the Annual Meeting. Nominations from the floor will not be accepted.

“I would enjoy the opportunity serve on the MFCU Board of Directors. I have been a member of MFCU for 29 years and am inspired that our credit union is a member-owned cooperative. As a Chartered Financial Analyst, small business owner, and long-time member of MFCU, I believe I can help our successful growth continue while remembering that our members are our priority.”

Geoff Gilbert is the founder and investment manager with Inukshuk Investments. He started his first company when he was eleven and has always had a passion for economics, business, and investing. Professionally, Geoff first enjoyed a successful career as a geologist, working in such places as Alaska, South America, Antarctica, and Australia. He transitioned to the world of finance in 2006 as a commodities analyst and started Inukshuk Investments in 2013. Geoff holds the Chartered Financial Analyst designation from the CFA Institute. When not at his desk he’s likely working with his wife on their urban farm, running Sentinel, or canoeing the rivers.

“I have been a member of MFCU for more than 25 years and look forward to serving as a volunteer board member. It is important to me that the credit union is a member-owned cooperative and is on solid financial footing. I am especially interested in the credit union’s ability to be an agent of change in the lives of its employees as well as its member-owners. I have extensive board experience and a long-standing interest in the power of money to be used for good.”

Martha Newell has been an MFCU member since 1991. She was a worker/owner at Freddy’s Feed and Read and manager of the Fair Trade store at the Jeannette Rankin Peace Center. She has served on a number of boards including Garden City Harvest and has been a freelance catalyst in Missoula since 1980. She has had a longstanding interest in the power of money as a tool for change. She loves playing ice hockey, telemarking, biking, and hiking. Her partner and 2 sons are all MFCU members and active members of the Missoula community. 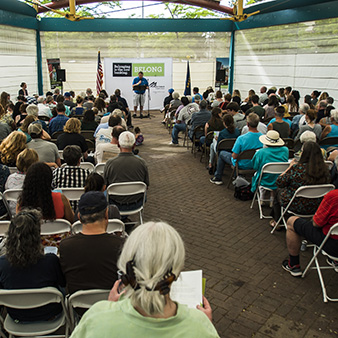